These are my first impressions after reading Who Fears Death (Nnedi Okorafor; 2010) in March 2016. Many spoilers. 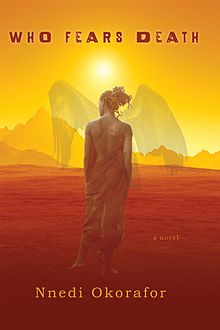 Onyesonwu is the mixed-race daughter of a rape with hair and skin the color of sand, despised by both her mother’s and father’s people, who discovers that she possesses great magical powers: shapeshifting, resurrection of the dead, and the ability to transport herself into an alternate reality.

This story is set in a post-apocalyptic Sudan, so far in the future that the people have forgotten their history and only know what is written in the Great Book, a religious text all children have to study. Only a few vestiges of modern civilization remain–some computers and handheld electronic devices, as well as water capture stations that enable people to live in the desert. (At one point, Onyesonwu and her companions take shelter from a storm in a cave where they discover a mound of dead computers and other electronics, which frightens them for unspecified reasons, hinting at an ingrained fear of the trappings of our modern civilization.)

Onyesonwu’s mother’s people, black Africans called the Okeke, have been murdered, subjugated, and enslaved by Arabic Africans called the Nuru, with the blessing of the Great Book. White people seem completely unknown to either race–perhaps mostly killed off in whatever apocalypse happened?–and Onyesonwu only meets one white character, a sorcerer-mentor whose skin color completely mystifies her. Another race of nomadic red people live in the desert in the center of a gigantic sandstorm; they practice magic routinely and seem to have no modern counterparts.

Onyesonwu’s mother was brutally raped and impregnated by a Nuru soldier. Onyesonwu discovers later that her biological father is a sorcerer who will lead a genocide of the Okeke. She undergoes female genital circumcision at the age of 11, believing that this will make her family more accepted in her village. This causes her to involuntarily transport into an alternate plane, where she attracts her father’s attention. Onyesonwu undergoes training in the magic arts so that she can protect herself from him, and eventually learns that she is prophesied to defeat the genocide.

Sidenote from Wikipedia: The novel was inspired in part by Emily Wax’s 2004 Washington Post article “We Want to Make a Light Baby,” which discussed the use of weaponized rape by Arab militiamen against Black African women in the Darfur conflict. According to Wax: “The victims and others said the rapes seemed to be a systematic campaign to humiliate the women, their husbands and fathers, and to weaken tribal ethnic lines.” Okorafor wrote that this article “created the passageway through which Onyesonwu slipped through my world.”

Onyesonwu’s story is a subversion of the Christ story. She is prophesied to free her people from enslavement, and she knows that she will have to sacrifice herself as a result. She embarks on her own hero’s journey to confront her father, taking her lover and best friends with her as traveling companions. She enacts several miracles along the way, but these are miracles of vengeance and wrath, not healing and teaching. She blinds an entire village. In another village, she makes all the men disappear and impregnates all the women. She is stoned to death as she has foreseen, but once her body is dug up and reburied, she is able to avoid her execution and escapes from the desert land to a distant paradise.

Because of her anger, Onyesonwu is not an easy savior to admire or like. Not only does she lose her temper frequently and unleash her great powers on everyone around her, but she also is impatient and snappish with her friends and often elects to run away instead of confront conflict. While she comes to regret some of her decisions, such as undergoing the circumcision rite, she doesn’t show remorse for many of her deeds. Her anger is part of her, and justified. Probably she would be unable to accomplish what she does without it.

But Onyesonwu’s anger–women’s anger–often makes us uncomfortable, and we are unused to seeing it as the focus of literature. That, and many other things, can make this a difficult book to read. Onyesonwu turns her critical eye on everyone around her. No one is an innocent in this world–except perhaps the mysterious red tribe, where Onyesonwu experiences a period of learning, growth, and relative tranquility. This book is steeped in magic, unfamiliar cultural references, and an ambiguous history. Sometimes we have to read between the lines; other times, we have to let events flow without questioning the logic too closely. Opening ourselves up to this story may be difficult, but the experience is powerful and rewarding.

These are my first impressions after reading The Female Man by Joanna Russ (1975) in June of 2014. This book will be addressed in a later essay.

Four women from alternate universes come together in this work of feminist speculative fiction.

Although The Female Man is billed as a “classic of feminist science fiction,” I hesitate to call it science fiction. It’s barely even fiction. More accurately, it is a feminist stream-of-consciousness rant that employs speculative what-ifs to imagine worlds both better and worse than our own, specifically the positions of women in those worlds.

Russ herself is one of the four women, the “female man” who tries and fails to make herself into a man in order to succeed in what is presumably our world, at least our world of the 1970s, when this was published. Russ’s anger is palpable throughout, although she tempers it somewhat with snarky humor. Several times, I found myself wondering whether we hadn’t moved past all this male-female behavior that Russ is criticizing, but truthfully, you only have to read a few Internet comments to see it alive and kicking in the 21st century. In that sense, Russ’s book is still needed and we are not yet free.

Those readers who come to The Female Man expecting a more straightforward narrative are bound to feel stymied by the lack of plot and the jumping around, without explanation, from one world to the next. Besides our own world, there is Jeannine’s world, where the Great Depression has never ended and women are primarily preoccupied with catching husbands, and there is Janet’s utopian world of Whileaway, where there are no men at all. I was feeling fairly adrift in all this until about three-quarters of the way through the book, when we meet Jael, a woman warrior in a world where men and women live separately and spend all their time literally at war with one another. This is probably the most cohesive section of the book, where Jael explains more or less what’s going on and the plot, such as it is.

Forget it, this book is not concerned with plot. It’s concerned with women, with what we endure and how things can possibly be different. Unfortunately, Russ does not seem able to imagine a world where men and women can live together with women not being subject to oppression. I hope she’s wrong about that.