Octavia Butler had a bleak outlook on the future of humanity, judging by her forward-looking science fiction novels. The dystopias portrayed in Parable of the Sower, Parable of the Talents, and Clay’s Ark (part of the Patternist series) depict a complete regression of civilization and are marked by senseless violence and brutality. In the Xenogenesis series, humanity has been all but wiped out in a global nuclear war.

When Butler looked ahead, she seemed to see only one thing that could save us: a transcendence beyond our brutal human natures. What we would become in these visions may no longer resemble human beings–and Butler seemed ambivalent about this–but it might offer the only hope for our salvation.

Each of these series posits such a transformation. In the Xenogenesis series (collected in the omnibus edition Lilith’s Brood), aliens arrive to save us. The story starts 250 years after a devastating nuclear war almost wipes out all human life. The few survivors have been picked up by an alien spacecraft and kept in stasis while the aliens, the Oankali, study them. Lilith is one of the first be awakened and integrated into an Oankali family. The Oankali train her to awaken others, introduce them to their new reality and their alien hosts, and reveal the Oankali’s plan: to produce Oankali-human offspring, a brand-new hybrid species.

The Oankali are genetic engineers and reproduce by genetic manipulation. They survive by traveling through space and finding species with promising genetic traits to mate with, such as humans. However, this means humans can no longer reproduces with one another; the Oankalis have disabled their fertility. Of course, there is rebellion.

Through the series, the humans–living in primitive conditions on Earth–are portrayed as without hope, a species that, if allowed to reproduce, would attempt to destroy itself again within a few generations. Humans are hierarchical and competitive, unlike the Oankali. As individuals, they can be intelligent and compassionate. But as a group, they are violent, destructive, and territorial. Even when the aliens allow some humans to start a new colony on Mars and have children, the Oankali hold out no hope for their future. The only hope seems to be that a greater power from the outside will find us and transform us into a better people than we can ever hope to be on our own. We are unable to cure ourselves, doomed by our own biology to always be fighting and murdering one another. 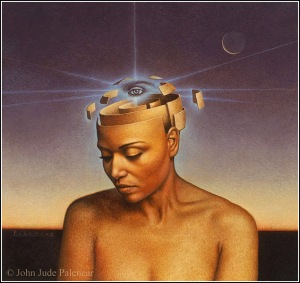 In the Patternist series (collected in the omnibus edition Seed to Harvest), some characters are immortals who can transfer from body to body to avoid death. They eventually evolve into a network of telepaths. Other people are infected by alien lifeforms. Thus, humans take two distinct evolutionary paths. In the last book, both groups have evolved into a nearly unrecognizable state; humans, as we think of ourselves, have ceased to exist.

In the Parable series, the protagonist, Lauren Olamina, is an empath. Despite the grim and harrowing dystopia depicted in these two novels, this is probably the most hopeful of Butler’s series. The character of Lauren embodies the potential of humanity to employ the previously unlocked powers of the mind and emotions to become something better than what we are. She foresees moving out into space and sowing humanity like seeds on other planets as the way to survive, and she has the leadership qualities to realize that dream. Lauren preaches that “God is change,” but instead of fighting change or surrendering to it, she advocates recognizing it and using change to make these far-reaching goals a reality. Here, Butler is proposing that we can evolve out of our tendency to kill, brutalize, and enslave one another–if we can survive long enough.

Even in Fledgling, Butler’s last novel (which is set in present day), she posits an evolved type of human living among us. In this case, they are vampires, but unlike any other vampires in fiction. They form symbiotic relationships with humans, positing an entirely new way of living together.

Throughout her fiction, Butler seems unable to conceptualize human beings as we currently are surviving. Whether it’s intervention from an extraterrestrial species or developing traits that allow us to evolve beyond our humanity, we have to become something unrecognizable in order to survive. Then the question becomes: if that is the requirement, did humans really survive? Or are we fated to self-immolate? When I read the news, I often feel that Butler was sharing a truth with this observation–but I don’t want it to be true. I want humans to be capable of collectively overcoming whatever impulse there is inside us that causes us to want to destroy one another. I want us to save ourselves, as ourselves, not look to some godlike being to save us or have to transcend our humanity to evolve beyond our self-destructive impulses.

One thought on “The Bleak Futures of Octavia Butler”